National elections are imminent in Canada and we have to ask ourselves: What kind of leader is needed to turn things around hard, in regards to climate change.

Recently observed leadership from ALL parties has shown no bold action when it comes to:

Justin Trudeau's lame attempt to train more fire fighters is a joke, if fires we have seen this year in Canada weren't so serious. It's like a pitiful band aid on a festering wound that will ooze year after year, burning up forests, lands, wild life, people, houses. Trudeau, if he wants to be re-elected, needs to INSTANTLY consult green energy entrepreneurs, engineers, scientists and bright people who are gung-ho to make the necessary changes.

Time for REAL leadership. Someone is desperately needed now, who is NOT afraid to stand up to stale CO2 releasing industries, halt old dinosaur projects and instead start fresh ~ utilizing the know-how of bright young entrepreneur, innovators, scientists, leaders who care and know what's at stake. 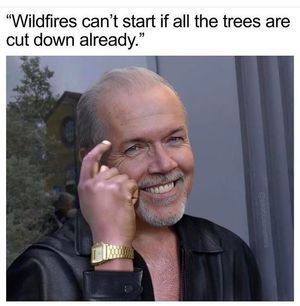 ~ Boldly first ignored urgent demands for calling a state Of Emergency, even as wildfires swallowed up entire towns and forests in British Columbia ~ then sending logging company Teal Jones in to CLEAR CUT the very old growth forests which temper and balance the earth's climate, capable to halt the alarming temperature rises we are all facing. Instead, he sends in brutalizing RCMP (not unlike what's been happening in Toronto and Halifax recently) to 'extract' and arrest mostly young protesters who stand up to his irresponsible permission to erase the only natural environment left to save us from definite demise and deprive our our children of their future survival.

And as the forests are still burning out of control, Horgans in-action in changing course, slowing down fossil fuel production and introducing much needed green energy ~ is only topped off by him sitting back doing NOTHING ~ but GOING ON VACATION, literally leaving RCMP run his 'business'!

Is this the type of leader Canada needs now?

Let's get off the couch, listen up, inform ourselves and stand up to a foul leader who is only interested in his power at any cost.
Call your local political leaders.
Easily google their phone numbers.
Demand immediate change, NOT promises!
*
Attend One Of These Already Organized Protests
On Monday All Over British Columbia
Against Illegal Police Brutality Witnessed At Fairy Creek
Poster

Today's powerful, soulful, inspiring tune that will
energize you into action
written 1966 by Gene McDaniels

Compared to What Gene McDaniels ~ Copyrighted 1966

I love to lie and lie to love
A-Hangin' on, we push and shove

Looks like we always end up in a rut (everybody now!)
Tryin' to make it real — compared to what? Everybodynow!

Poor dumb rednecks rollin' logs
Tired old lady kissin' dogs
I dread the human love for that stinking mutt (I can't use it!)
Try to make it real — compared to what? Everybody now!

The President, he's got his war
Folks don't know just what it's for

Nobody gives us rhyme or reason
Half of one doubt, they call it treason

We're chicken-feathers, all without one gut. Can’t believe it!

Tryin' to make it real — compared to what? (Sock it to me)

Church on Sunday, sleep and nod
Tryin' to duck the wrath of God

They really got to be some kind of nut (I can't use it!)
Tryin' to make it real — compared to what?

Kind of brings to mind ol' young King Tut (He did it now)
Tried to make it real — compared to what?!

Tryin' to make it real — compared to what?