This morning, the trees stood heavy with life giving dew.." 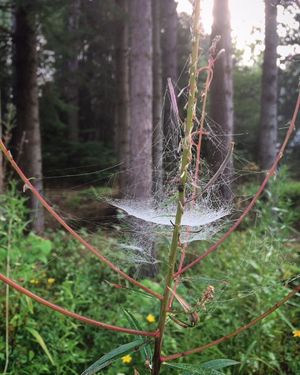 Spider has weaved her intricate webs for millions of years, year after year. She works closely together with the other creatures of the forest, wetlands and gardens. She takes, and she gives back.

Human has weaved its harrowing network of industry, highways and plane routes for about 100 years. It has been proven to be intruder, invader, interfering with healthy ecosystems, clear cutting 1000 year old growth forests at lightning speed, stupidly eliminating the future of its kids. Although human itself only has a lifespan of 50 - 100 years, its path of endless destruction has driven planet Earth's environs to the brink of complete elimination.

Please, help spider weave her webs for another 1000 years. Tell human to back off, humble down, give back and no longer take ~ or be extinct sooner rather than later. Be The Change you want to see on Planet Earth.